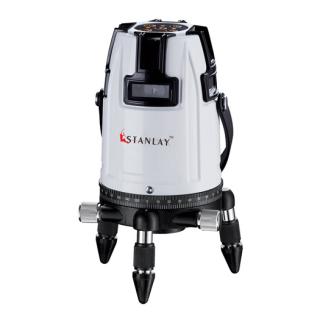 The 8PRX Evolution Crossliner laser is the most advanced laser level in its class and is ideal for engineers & project teams of both building construction & precision engineering sectors.The instrument incorporates 4 Horizontal and 4 Vertical lasers for level & plumb, layout and positioning applications and with the   highest level  accuracy of 1mm.

The instruments incorporate a number of features which enhance   efficiency including a pivoted housing with it's own tripod feet that   allows the instrument to be used by placing directly on the ground. Or   the instrument can be mounted on a standard 5/8'' x 11 survey grade tripod.

Other important features include an Antishake function  allowing the  instrument to be used on vibrating surface typical of  construction  sites, factory floors etc - the electronic positioning motors automatically correct the error to level the instrument. In addition, the instrument is designed with a vernier  adjustment  mechanism with a 360 degree graduated marking to allow very  precise  positioning. The unit contains 4 horizontal laser lines that produce a continuous 360°laser line and 4 vertical laser line which are at right angles to one another. The unit is most ideal for almost any precision alignment job.
Special high-performance diodes generate lasers which are twice as bright and remain visible over longer distances - even in bright ambient lighting conditions and on dark surfaces. The 4 horizontal laser diodes project a homogeneous laser line. Project the horizontal level across the entire area to do the leveling, marking or positoning job in one go instead of having to rotate the laser . Furthermore, unlike a rotary laser, you get a solid homogenous line all across. Perfect for high precision construction & manufacturing activities. The 8PRX is based on electronic positioning motors controlled by temperature-stable sensors that automatically align the lasers to be level.
Self-levelling range ±2.5° The electronic motor in conjunction with the built in sensors continuously monitor that the lasers are leveled. This makes the 8PRX useful for use on vibrating surfaces and windy weather which are typical operating conditions in a construction site or industrial unit. The adjustable feet allows the device to be utilised by keeping on the floor, positioned on flat or even sloping surfaces. The plumb laser at bottom is used to fix or mark a point on the surface. Alternatively, The device can be mounted on a standard light weight aluminum tripod (5/8x11") using the tripod adaptor provided with the instrument. Out of Level Sensing

Out of level is indicated by optical signals when unit is outside the +/- 2.5°self leveling range. The auto button on top continuously blinks until it levels. Maximum range of instrument is 50 m. When utilised with laser receiver. Ideal for most indoor and outdoor applications. The 8PRX has an integrated hand receiver mode and the laser lines are detected with the laser receiver RX50 upto a max. of 50m radius.
The laser receiver has LED's for indicating whether the laser is above or below the level (in reference to the broadcasted laser beam) ensuring positioning with accuracy. It can be either mounted on tripod or kept on floor.

Specification
Faq
Do you have a question which we can answer for you? Click here if Yes
Downloads